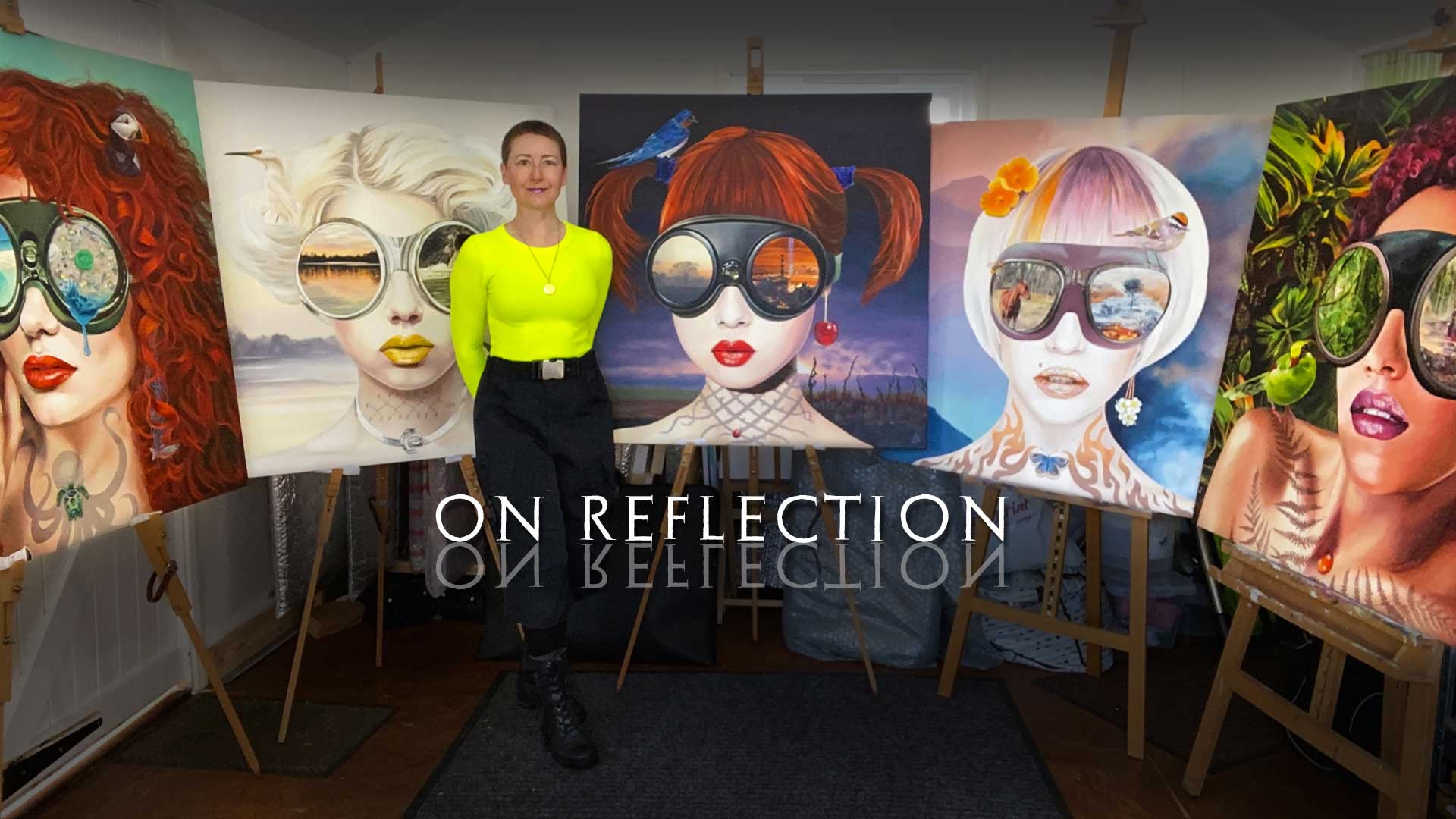 The inspiration behind this project occurred when I found a pair of safety goggles in the gutter one day when I was out for a walk. Walking home with the goggles I had a clear vision of a young girl wearing them, in each of the lenses I imagined two powerful contradictory images.

I had recently watched the HBO series dramatizing the Chernobyl disaster – it had affected me deeply. The idea of the air we breathe being containing an invisible poison, was horrifying. Worse still was the idea that the disaster was man made, and the realisation of how close we had come to a global catastrophe.

By nature I am an optimist and, as I walked I had the idea of creating a painting using the goggles with one lens reflecting the image of the burning reactor, and the other showing a pristine landscape, a world we would all want to wake up to.

I had the goggles, now I needed a face – here serendipity lent a hand.

A couple of days later, whilst sitting in a park, I saw a beautiful 5 year old Chinese girl, her hair in bunches. She carefully pulled out of her pink handbag a pair of reflective sunglasses and put them on in front of me. In that instant the idea for the composition of the painting began to solidify.

Back in the studio I started putting together some visuals. (The graphic designer in me at work!)

The idea of creating one painting quickly developed into the concept of creating a series, themed around the ecological and environmental disasters that beset us, disasters of our own making.

“Hope” was as important to highlight as the disaster. A reminder that we can all play a part to help turn around climate change and improve our precious environment. Each painting has a balancing element of hope.

On April 25th 1986 technicians undertook a poorly designed experiment which caused a chain reaction which led to an explosion in the core of the Chernobyl reactor. This released large amounts of radiation in to the atmosphere.

My fascination of birds led to there being one in each of the paintings. I wanted to know what species were most affected as a result from the radiation. The Barn Swallow couldn’t produce enough antioxidants that the large amounts of pigment in their feathers needed, so sadly didn’t fare well.

I read a distressing article about the farmers that kept on working the land after the disaster. I used a cherry to symbolise “the fruits of their labours” in them not knowing how dangerous the ground was. The stem of the cherry is made from precious 24k gold leaf.

I designed a necklace/tattoo that had a double-edge, it was made from beautiful rose branches but it also had sharp thorns that cut into her neck when she moved – a constricting and sinister choking element.

The serene image of the tree in the dawn mist is one of my ‘perfect places’ symbolising all what we should treasure but take for granted and the element of “Hope”.

Every year trillions of Nurdles which are tiny plastic pellets are washed up on beaches around the world, along with other plastic waste, bottle caps, fishing net/line, household waste. Nurdles are ingested by hundreds of marine species who mistake the toxic waste for food.

Nurdles have also been nicknamed ‘Mermaid’s Tears’. I needed an essence of mermaid, a beauty with voluminous hair floating in a turquoise ocean. Drawn to the paintings of the Pre-Raphaelites I looked upon them for inspiration. She sheds a plastic tear due saddened by the state of our oceans.

Distressingly seabirds such as Fulmars, Puffins and Shearwaters have all been found with hurdles in their bodies.

An octopus necklace/tattoo hangs around her neck symbolism for the suffocating situation. In the middle sits a turtle jewel.

A perfect crystal clean turquoise sea and soft silky sand is the “Hope” element. How can we help? Watch this fab little video and sign the petition #PlasticsTreaty

Deforestation of the Rainforest

According to the UN, we lose natural forests the size of London every week, or roughly one football pitch every 2 seconds. Mainly due to the clearing for meat, soya beans and palm oil.

At a very young age I was introduced to nature by my father, so it has always played a big part in my life. The deforestation of the rainforests is one man-made disaster particularly close to my heart as I find it so devastatingly upsetting that we have lost so much biodiversity due to farming. This is such a threat to our planet and climate change.

My most memorable holiday was to the rainforests of Borneo where I was able to trek through the magnificent jungle in search of Orangutangs in their natural environment. It was followed by having tea with the tribal chief and his wife of the village and learning about their way of life in the rainforest. It certainly was an adventure and a place where I felt truly ‘at home’. This painting was a desperate attempt to draw attention and raise further awareness to what we are doing to our precious rainforests.

In 1951 Dupont started purchasing PFOA (Perfluorooctanoic Acid or otherwise known as C8) from 3M for use in the manufacturing of Teflon. Over the decades they dumped PFOA through outfall pipes and into unlined pits which then entered the water system.
PFOA also called a “Forever chemical” is so stable it never breaks down, so is expected to remain on the planet well after humans are gone from it.
Studies have found that it is present worldwide at very low levels in just about everyone’s blood.

I live in the beautiful Kent countryside and have the privilege of enjoying the natural environment. Living close to rivers and observing the wildlife that inhabits them is one of my many joys. I was researching man-made disasters and came across the story of Dupont and it’s dumping of toxic waste. It shocked me so much it had to be the fourth painting. The statistics made my blood run cold. For the full story watch the brilliant film ‘Dark Waters’.

I am lucky to live near some beautiful lakes and being an early bird I have captured the most stunning dawn sunrises over the water. This is my ‘go-to’ place when I need to ground myself and I certainly recommend it! This is the ‘Hope’ element and a reminder to be conscious of the water we use and how lucky we are to turn on the tap and have safe drinking water.

5 million acres of US woodland were burned in 2021.
Climate change is causing increased lightening and stronger winds to create and stoke wildfires. The fire season smoke from Siberia reached the North Pole for the first time in recorded history.
As many as 90 percent of wildland fires in the United States are caused by people, according to the U.S. Department of Interior.
Wildfires are wiping out native chaparral, they are then replaced by the non-native plants that accelerate fires. Habitats are changed and wildlife and insects that thrive on the flora are driven to move out of the area.

The last painting is dear to my heart. My friend who I worked with on a large graphic design project in LA has a ranch in the Agoura Hills, California. In 2020 she had to be evacuated, along with her horses and dogs in the middle of the night because the wildfires were straight for her home.  My brother lives in Australia and during their summer he sent me images of wildfire devastation in villages near to where he lives. This painting highlights the way climate change is increasing the risk of severe fires by causing vegetation to dry out and the affect it is having on the environment.

Thriving wildlife in natural surroundings is the “Hope” element in the reflection. I used to hang a photo of Elle Macphearson on the fridge door as an aid to eating well. It was nice to have something beautiful to look at and a reminder that you are what you eat. I wanted these paintings to do just that, to look beautiful but also as a reminder that our environment is our responsibility and if we make an effort we can all keep it beautiful.

I have chosen to depict five man-made disasters that have made an impact to our environment. Each one links also to the five elements that underpin Daoist philosophy – a philosophy that stresses the relationship between mankind and the earth upon which we live and depend. A relationship characterised by the notion of stewardship rather than ownership.

Take a look at my videos to show the paintings in more detail and an idea of perspective:

Or visit my instagram page where you can see ‘highlights’ of the paintings in stages.