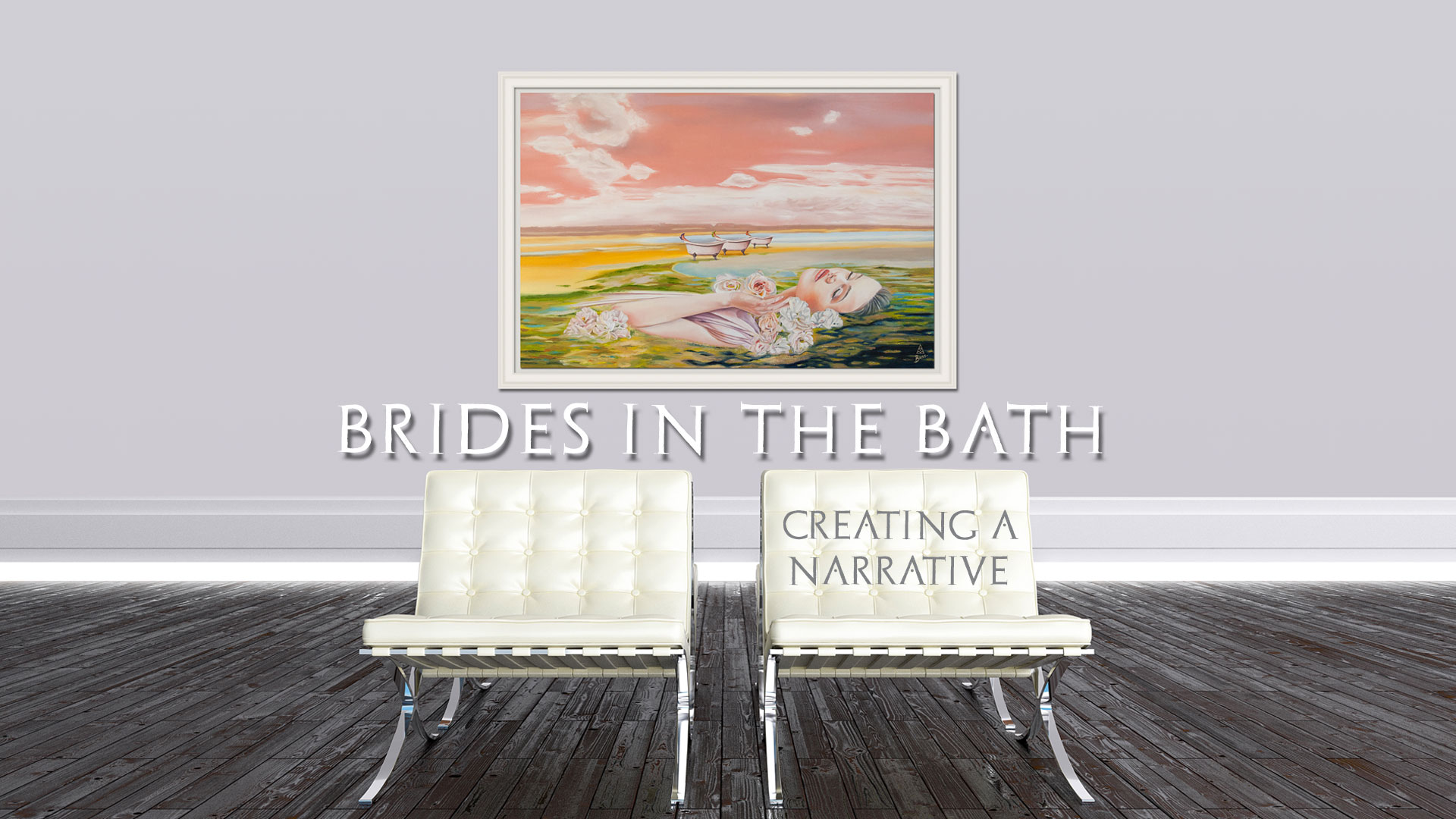 I have a real fascination for adding a narrative to my paintings. I think it has something to do with the hidden, and I’m sure that’s why Salvador Dali and the way he hid images within images have always intrigued me. This has become a greater need with my most recent paintings “On Reflection” and the “Brides in the Bath”.

The idea of this painting started with my love of photography combined with a need to explore the beautiful Kent countryside. During trips to Margate and Herne Bay I took many photographs capturing the glorious beaches and the ever-changing light along the coastline. Back at my studio and searching for inspiration one of the photographs caught my imagination. It was an image of Margate beach with the tide out as far as it could go and the sand glimmering cornfield yellow. Pools of dark green seaweed had been trapped closer to the shore, which looked more like reeds and lily pads in a river than on a beach, it was a perfect landscape to paint, all I needed was an anecdote!

I began researching incidents relating in or close to the area and came across a dark and horrifying story that instantly stirred my curiosity.

In 1912 George Joseph Smith met Beatrice (Bessie) Mundy. Not long after they met and after finding out she had inherited £2500 from her late father he persuaded her to include him in her Will. They were married for two years during which time he left her but returned some months later. On his return he convinced her she was epileptic and took her to see the doctor claiming she had fits that she was unaware of. On 13 July 1912 they both moved to 80 High Street, Herne Bay, Kent where they purchased a steel bathtub that became his perfect murder weapon. After mercilessly drowning her, Smith sent the doctor a note saying she had died in the bath. An inquest followed where the doctor attributed it to accidental death by drowning and he was awarded her inheritance.

In 1913 he went on to murdering Alice Burnham and later on Margaret Elizabeth Lofty in 1914, all of them drowned by force. In 1915 he was convicted of the murders and sentenced to death by hanging in Maidstone Prison. It became publically known as the Brides in the Bath Murders.

So using my serene landscape I began adding the subtly dark hidden undertone. There was something about the seaweed in the image that instantly reminded me of the painting “Ophelia” by John Everett Millais – the Pre-Raphaelite’s being another huge influence. In the foreground I placed a glowing bride floating in the water looking up at a salmon pink coloured sky surrounded by perfumed Old English roses. Further out and sinking into the sand are three bathtubs depicting the three murdered brides with different coloured shoes.

Exploring the counterpoint between the beauty of nature and the dark side of humanity is a recurrent theme in my work. In this painting the viewer is invited to be deceived by the contrast between the delicacy of the image and the grim drama that lies behind it.